The Daily Lives of Highschool boys came out a couple of years ago. At the time my best friend Tony and I had our own daily routine of watching anime together on his computer when we ate dinner. This was one of the few animes that made me unable to eat, because I was busy laughing. It’s a very light hearted and silly show about a bunch of boys hanging out. Nothing particularly stands out, but it’s certainly gives you good feelings.

As a girl, I had often wondered what it was that boys did. For example, in high school, all the girls would talk about seemed to be celebrities, music, make up and BOYS. Seriously, that seemed to be all girls talked about. When I over heard the group of boys however they always seemed to be talking about sports, video games and lots of random things. The girls would often complain that boys were silly and childish, the fact they still constantly played pranks for example. I envied this about them though. Now the cynical side of my head tells me that “The Daily Lives of Highschool Boys” wouldn’t really reflect what highschool boys do – after all, highschool animes about girls never feel that accurate. That being said, it is very believable and exaggerated in all the right places!

The anime follows a group of three boys, Tadakuni, Hidenori Tabata and Yoshitake Tanaka. The episodes are split into mini stories, so that each episode has three stories. The stories are just things that happen in their lives and interactions amongst themselves as well as with other people. The main focus is on comedy, and it loosely follows the popular Japanese style of “Funny Man, Straight Man” where Tadakuni often reacts negatively to his two friend’s ridiculous plans, but goes along with it anyway. He’s often made into the centre of the joke, but they all get along really well. There are also some very obvious gags, and the anime makes fun of itself being an anime a lot too!

Some of the stories are just very silly, actually no, most of the stories are very silly. The scene where they try on skirts for example has great execution and a solid gag.  The story where they find the large stick on their way home from school made me remember the times my friends and I would play with large sticks on our way home from school. It’s the nostalgic appeal that gives the warm fuzzy feelings in your belly I think. All the characters are loveable in their own ways!

This is a very easy anime to watch, and I often re-watch bits in the background when I’m doing chores or something. It has a relaxed pace and soft humour. I also really enjoyed being able to watch it with Tony, so I think it’s a great one to watch with friends. If you do watch it, be sure to tell me how accurate it is in telling the true story of the daily lives of highschool boys! 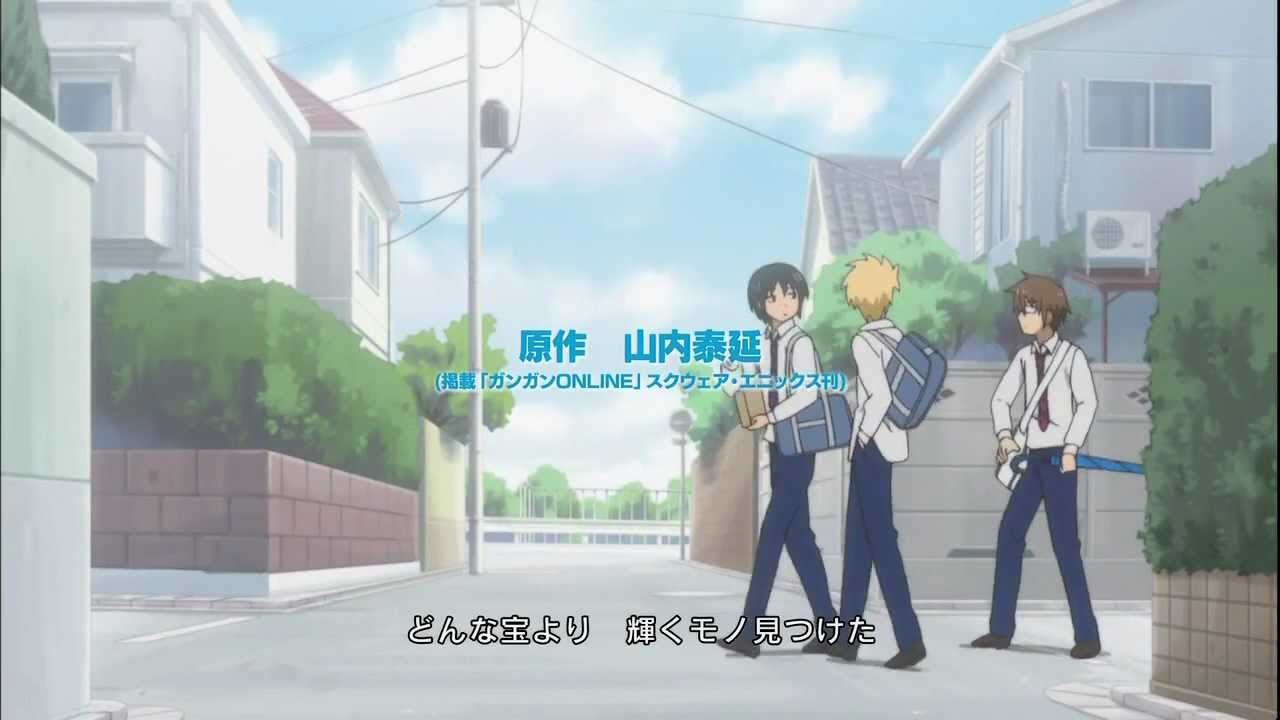