Last night a group of my friends and myself were able to immerse ourselves in the Crystal Maze experience. For anyone outside the UK, this might sound very underwhelming. But for those of you in the know, it was a night of reliving our childhood dreams in the name of glory!

First things first, what is The Crystal Maze? The Crystal Maze was a British game show that ran from 1990-1995. With 6 seasons and over 70 episodes, it’s one of the UK’s most beloved game shows. It’s very exciting that there will be a new season starting this year, hosted by non other than IT Crowd‘s Richard Ayoade.

The game consists of teams of 6 random people. Together they are led through a labyrinth consisting of four different zones, Ocean, Aztec, Mediaeval, and Future, by the host. In each zone are various rooms with tasks, split into physical, mental, skill, or mystery.

One person is picked per room, and they have around 2-3 minutes to complete said task. If they do, they win a crystal ball. If they run out of time and don’t get out of the room, they are locked in, although they can be set free by spending a crystal ball.

At the end, the team is led to the dome. Each crystal ball that they’ve collected is worth 5 seconds in the dome. The dome sets off fans, and silver and golden tickets fly about. If your team collects 100 tickets or more, deducting any silver tickets, you all win a prize.

It’s best however for you to watch a few episodes yourself, because it really is a fun show! The host is very sassy, which seems to be quite a British trait! 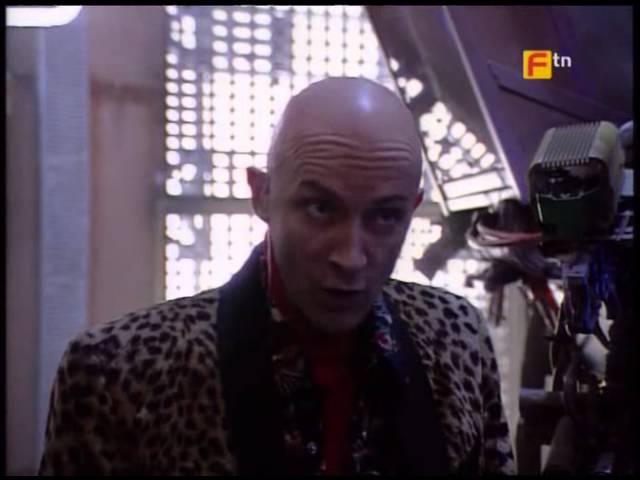 Although the TV show is now getting a revival, The Crystal Maze Experience is something else. Fundedthrough Indiegogo, the experience is brought to the public and changed slightly. Now you and a group of your friends of 8 are led through the same style maze, collecting crystals for time in the dome. You don’t get a prize however, and the experience does cost £52.

That being said, it was completely worth it. Over 90 minutes of a truly fun, action packed adventure for myself and my friends, it felt exactly like how we always imagined it would. The setting, games and even our quiz master was exactly how it was shown on the TV show. With the added extra of no Ocean Zone (it’s replaced by Industrial Zone) so we didn’t even have to get wet.

There’s an added element of competition, as 4 teams go into the maze at once. At the end, your golden tickets are counted against each other. Spoiler alert, the winning team still don’t get anything.

But it is fun knowing you’ve got other people to beat, and the satisfaction of getting more crystals than they do is pretty good.  Second spoiler alert, we came second, but it was still sort of satisfying.

The experience is held in central London, so very easy to get to. They also have a location in Manchester which is nice. The masterminds behind the experience very clearly love the show and have a lot of passion for recreating it. I really approve and support that level of commitment and love.

My Experience – a rocky start

My friends and I show up outside the venue 30 minutes before our start time. There are other teams showing up, and the entrance looks like the reception of any normal building. Inside there is a locker room, and after scanning in our tickets we place our bags and coats inside a locker.

I lose my locker key within two minutes, and the staff have to open my locker with a master lock for me to put my phone away. One of my friend’s has brought face paint, so our team draws on war paint, looking better and more kickass than any other team. I find my locker key, tied to one of my belt loops.

I go to the toilet before the game starts, and when I leave the toilet everyone has left. Another member of staff takes me through some doors and up the stairs into a room where my teammates and friends hadn’t realised I was missing. Thanks guys.

Our Quiz Master jumps out and leads us into a futuristic room, where we all go into a capsule like thing, and have the doors shut. He then opens up the doors one by one making space-y sound effects. It’s comical and light hearted. Our quiz master is called Prof Bison Sexhorn and he wears an open white shirt, black leggins and brown boots. He looks like a pirate out of a romance novel my grandma reads, in a good way.

He leads us, running, to a room that’s a hole with a ladder. It sounds very boring, but honestly, it was the most exciting ladder I’ve ever climbed down. That’s the power of a good quiz master. Someone who’s blood sings with theatrical whoo-ha. He sets the atmosphere, the pace, and he has a bucketful of sass.

In the first zone, the Future Zone, our team is led into a room. There is a door, and through the door is a bunch of poles about waist high. The aim of this room is for one team member to make it around the room, in the right order whilst blindfolded. The rest of the team have a map and has to shout orders to the blindfolded team member.

Our team member dons the helmet, then proceeds to walk about losing two of our three lives. Despite the terrible start, we finish the room and gain a crystal fairly quickly.

The next room, a puzzle featuring combination locks and chemistry, goes well. The third room involves a big monolith with lights and switches, and we again whiz through it. The fourth room is filled with green lazers, and our team captain mission-impossibles his way through with time to spare.

Honestly, you’re not meant to get through the zones that fast, but what can I say? Our team rock.

The next zone is the Medieval Zone. I mention that it’s cold and Prof Bison Sexhorn singles me out for the next challenge. Warning, I’m a little salty about this. Now in the gameshow, if a team is doing really well, the quiz master sets them harder rooms. Normally the captain picks who goes into which room (physical, mental, skill, mystery).

I get put into a room that has a tree with some holes in it. Inside the tree is an egg, and using my arm strength, some maneuvering I am meant to pass the egg upside the tree to a hole high up to get to a key that unlocks the egg. I understand the challenge. I also understand there’s no way I could complete it.

For one, the egg feels like a weight of a heavy bowling ball. I can’t lift it up off the ground, never mind pass it up inside a tree to shoulder height. The other thing is, my arms weren’t really long enough for me to pass the egg that was too heavy.

Of course, I could just be making excuses for being terrible at the room. However I gave up with more than half the time left. I didn’t see the point continuing when I knew for certain I wouldn’t be able to do it.

We do manage to get through the rest of the rooms fairly well. One involved pub signs, another a stained glass window.

The Aztec Zone and Industrial Zone

The Aztec Zone was full of sand. I mea, full of sand. I can’t remember how many tonnes of sand our quiz master told us was in it, but it was a lot. There was sand in my shoes and my socks and well, a lot of places.

Our captain had a room where he had to build a giant cube from tetris pieces, a feat he completed with one 1 second to spare.

I redeemed myself in a room involving a treasure map and a lot of digging. I got sand under my fingernails, in my hair and even more places.

One room had an obstacle course that seemed almost impossible which we failed, but our team mate had a lot of fun showing off her physical strengths.

In the industrial zone we have our first locked in team member. Losing 3 lives, they were taken to a “jail” with the option of breaking out by completing puzzles. It took them the time our team completed two more rooms to break out.

One room in the industrial zone had an electric toy car in a maze. Another room had a giant batter pack and hose sized circuitry. Our team’s pace slowed down considerably. At one point I sat down and emptied sand from my shoes, much to the amazement and scolding of the quiz master.

The dome is very impressive. It’s not as exciting to look at as some of the zones and rooms perhaps. But it’s without the doubt the most exciting part. This is what we’ve been working towards. Here is where our hard earned crystals come to use.

We enter the dome, and the fans start turning. We collected 11 crystals in total and had 55 seconds inside the dome. With tickets flying everywhere, it’s a lot harder to grab them than you would imagine!

More adrenaline rushes through me during this part than any of the running, climbing and wiggling I had to do beforehand. Our team manage to collect something like 240 tickets.

We come in second, the winning team getting 270 tickets. My competitive side is sad.

However it quickly goes away because I just spent an amazing evening with my friends working together, puzzle solving and butt kicking. It’s probably the most fun I’ve had all year, and it definitely ranks as one of the best experiences of my life.

I think my only complaint would be the fact you don’t get anything at the end. Even a printed out certificate saying “I completed the Crystal Maze” would have been a good souvenir. It’s just a small niggle though, and I would highly, highly recommend people try it out for themselves whilst they still have the chance!

Do ask for Prof Bison Sexhorn though, because his hosting really went a long way in creating the atmosphere and recreating our childhood memories.