If you have seen the new Star Wars: The Force Awakens trailer yet, then you need to go watch it now. As far as teaser trailers go, it’s hit every nail on the head for me. The first trailer was had my curiosity, but this second one has gotten my attention. 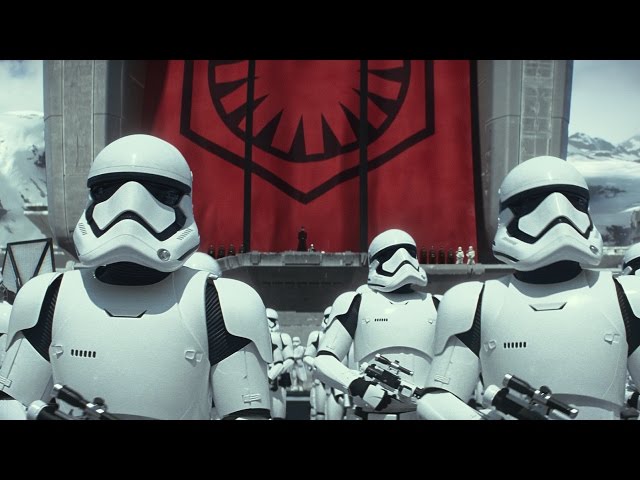 The trailer opens with a wide pan shot of a dessert planet which has since been revealed to be a planet called Jakku. Well this planet has already got us brimming with questions, most notably, what is that Star Destroyer doing there?! There’s got to be a back story to that, and even if it’s only a couple of sentences, I hope we get to hear it. Ah, there’s also of course the broken X-Wing, which by the looks of it looks like a first gen model. We see some new models later on though!

Next up we see Darth Vader’s beaten up helmet, which is very symbolic in itself. However there’s narration over it, and we’re still guessing as to who’s speaking. Is it Luke Skywalker? Because the narrator says something along the lines of “My father has it.” referring to the force, and it makes you question… is Vader alive? Or is he now a force ghost?

Next up, it’s the tell tale robotic hand and darkly cloaked figure reuniting with a somewhat beat up looking R2D2. Whilst in the first trailer we got introduced to the adorable BB-8, I’m glad that R2D2 gets at least a little homage. I’m excited to meet BB-8 as well, and I’m glad the robots still have physical form and aren’t simply done with CGI.

Next up the trailer picks up the pace and sort of hammers us with a bunch of really exciting things. It’s sort of saying “Flyboys? You got it. New villain Kylo Ren? Have his full mask. Storm troopers? Damn right they’ve got a redesigned body.” which leaves us going jaws opened, questions bubbling. This is going to be so good…

Then of course we introduce our new characters. Daisy Ridley plays another inspiring female lead, who’s breasts aren’t on display (let’s hope she doesn’t get caught by Jaba…). I’m especially looking forward to what John Boyega will bring to this, as I really enjoyed him in Attack the Block. Finally we have Oscar Isaac who’s character Poe has been said will play a very important role in the new film.

Finally we end on the moment that everyone burst out crying to. Beloved Han Solo, giving his signature grin, and of course adorable Chewie who’s not aged at all. He must be what, 200 years old now? If only I knew the wookie’s secret to eternal youth and luscious hair. The trailer ends with the heart warming line “Chewie, we’re home.” and then the iconic theme tune. Perfect.

Everything about the trailer fills me up with hope. The characters, the scenery, the music. It’s everything I want out of a Star Wars trailer, and now all is left is to see if the film lives up to all the hype. A lot of people still feel worried about it, but I for one, am not throughly excited to watch Star Wars: The force awakens in December.