Are these the worst sexual experiences ever?

I love sex. That’s pretty obvious. But I’ve also had my fair share of terrible sexual experiences, as I’m sure we all have. However recently I’ve been reading around the net and realised my bad times weren’t nearly as bad some poor people! So are these stories the worst sexual experiences ever?! Or have you heard (or experienced) worse?!

It all started the other day as I was browsing through some old tabloid articles I came across a story about a 30st virgin who managed to bodyslam his girlfriend who was 8st into the wall, making a huge hole and giving her concussion. I think it’s pretty freaky any time someone’s head is bashed about, having experienced a close relationship with my bedpost on multiple occasions, but to actually break the wall?? And it being your first time having sex also! The poor guy thought he had killed his girlfriend, but she was fine and they managed to fix the wall without her parents finding out. He’s also now lost a ton of weight so it’s a happy ending. You can read the full story here.

That got me thinking, has anything quite so terrible ever happened to me? I find that the truly bad times I simply manage to forget, either because it was awkward and not fun and not worth remembering or I simple turn bright red if I think about it! I’d have to say though, the time I remember being most frustrating was when I was travelling last year with my lover.

Although it was frustrating and at the time the anger from simply not being able to sleep when I knew I was tired, ranks that as one of the worst nights I’ve had. In retrospect I may have been unfair, and we had a lovely holiday all in all. Comparatively to other stories I’ve read, I’ve apparently had a pretty good experience so far!

Common stories about throwing up, peeing and pooping unintentionally or being walked in on often rank high on worst sexual experiences ever. In fact, being body slammed is also very common with the following story which had me almost in tears by reddit user Threwa

“I turn my head, and see a wall of mirror-fronted wardrobes I hadn’t seen before. I can see me, lying there, arse optimistically raised off the bed, and my obese transatlantic friend, and suddenly everything makes a lot more sense. His dick is too small for him to get into position and slip into me, so he’s raising himself up, closing one eye to try and line up his knob with its destination, and then just fucking falling on me and HOPING IT GOES IN, slamming up and down over and over again like a blind kid given a whack a mole hammer and told “hey, kid, go crazy!” ”

But you know what I’ve come to realise from all these “worst sexual experiences ever” stories? A lot of the time, it feels like people are unprepared for sex. A lot of the stories are from first timers, or when people are trying something new. There’s often a lack of communication, whether from embarrassment or the thought of just wanting the ordeal to be over. I think for better sex lives, we need better sex education. I’m not saying let’s teach everyone the karma sutra, but starting off with explaining how sex works and that porn isn’t a manual would probably go a long way! 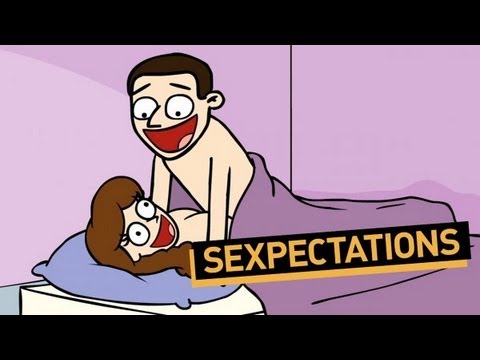 As collegehumour so cleverly put it, it’s all about “sexpectations” and what people expect to happen from sex. That orgasms always happen, that as soon as your naked you’ll feel good or that everyone should be able to bend their bodies like an acrobat! Here’s the only things you need to know to avoid the having the worst sexual experiences ever:

Before trying something new, talk to your partner about it first and make sure they want to try it!

Try not to worry too much about being exciting or clever, the missionary position is a classic for a reason. It feels good and it works. Whatever you decide to do, go with the flow and do what feels right!