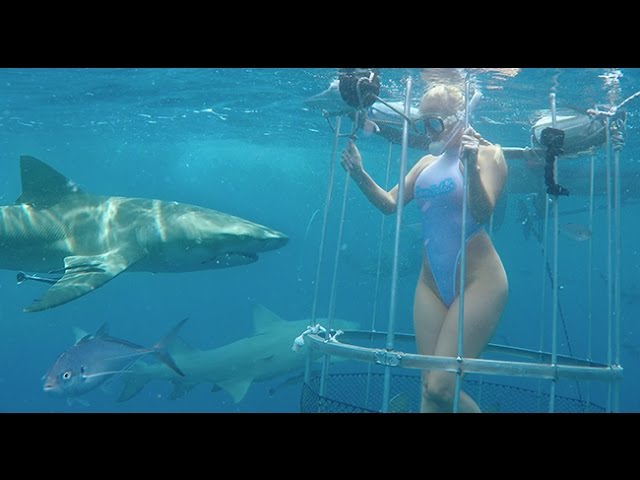 Camsoda are launching their new broadcasting system soon. The new systems will allow performers to record underwater anywhere in the world. To demonstrate Molly Cavalli took a shoot inside a shark tank to help promote Camsoda.

The shoot was put on hold as Molly was taken to hospital to treat her injury. She has 20 stitches in place. She later reassured her fans via Instagram that she’s recovering and perfectly healthy.

Thanks for your well wishes guys. I'm totally fine. It's not as bad as it seems. Im healing quickly. It was still an amazing experience. Much love to my @camsoda team for taking good care of me. 💋💋💋

Many people believe the shark attack might have been faked, or that the whole thing is part of a daring publicity stunt. Many point out the fact although there are cameras with wide shots present, only a close up was used of the actual attack, not showing a shark taking a bite out of the camgirl’s foot.

However as publicity stunts go, this would definitely up there on the “reckless and dangerous” scale. Whether it’s true or not, we’re all very happy that Molly Cavalli is safe.

The Digital Economy Act is finally making it’s way through the UK legal system and will soon be implemented. This means that adult websites will have to use new technological systems to age verify any user that visits their sites.

However Parliament also wants users to register themselves at Post Offices to be able to access adult content. They believe age verification needs to happen in person, with your device. Logistically speaking it’s ridiculous, and sounds like another loop to stop people from watching pornography.

Other methods such as inputting credit card details or passport details online to prove age has been met with concerns over the safety and retention of sensitive personal data. This step is put forward to help minimise the risks of data theft.

Nobody is having sex during the week